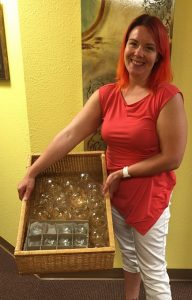 Cupping is a Chinese modality, or form of medicine, that involves creating a suction effect on a specific part of the body in order to stimulate blood flow and promote healing. The suction is created one of three ways, a heated rounded cup, a mechanical suction pump that works through a valve located on top of the cup or a rubber cup that squeezes out the air over uneven or bony body areas.

Whichever tool is used, the effect is the same – a small area of low air pressure is created next to the skin that causes increased blood flow. This in turn causes skin marking or bruising that will disappear over time. There is a feeling of pressure that happens when the suction is formed between the skin and the cup but is not painful to most people and can be relaxing.

Cupping is typically used in traditional Chinese medicine to treat:

The price for just a cupping treatment is $60 here in Colorado Springs.

Another type of Cupping is known as “fire cupping”. A cotton ball of alcohol is lit and placed in the cup for a second, the cup is then put on the area being treated that has had oil applied. The cup can then be moved around along the meridians giving the feeling of a mini-massage while helping to boost immunity.

Cupping is also used on the back, neck, and shoulders to help loosen tight muscles. However, it is not advised over certain skin conditions or to the abdominal or sacral regions of pregnant women.